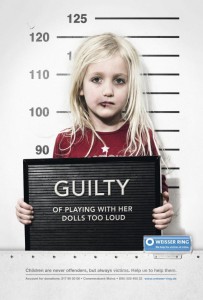 To many people, child abuse is narrowly defined as having only physical implications. In reality child abuse includes physical abuse, neglect, emotional damage or harm, sexual abuse, physical neglect, exploitation and any act or behavior that would harm the minor child. Child abuse occurs in any cultural, ethnic, occupational and socio-economic group. A parent or caretaker may begin by inflicting minor injuries, then may increasingly cause more serious harm over a period of time. Therefore, detecting the initial small injuries and intervening with preventive action may save a child from future permanent injury or death.

One of the most important grounds for suspecting child abuse is “when the child tells someone”. Reporting child abuse to police and child protective agencies is the key to stopping future harm and damage to a child.

May be defined as any act, which results in non-accidental physical injury.  Inflicted physical injury most often represents unreasonably severe corporal punishment or unjustifiable punishment . . . intentional, deliberate assault, such as burning, biting, cutting, poking, twisting limbs, or otherwise torturing a child, is also included in this category of child abuse.  (California Department of Justice, 1993, p. 3)

Child’s behavior, child’s statement and location of injury on the child’s body. Bite marks, bruises, burns, head injuries, “whiplash shaken infant syndrome”, wounds, and damage to skeleton, damage to internal organs.
Neglect is essentially the negligent treatment or maltreatment of a child by a parent or caretaker under circumstances indicating harm or threatened harm to the child’s health or welfare.  The term includes both acts and omissions on the part of the responsible person.  The California Child Abuse and Neglect Reporting Act defines two categories of physical neglect–severe neglect and general neglect. (California Department of Justice, 1993, p. 9)

Means the negligent failure of a parent or caretaker to protect the child from severe malnutrition or medically diagnosed non-organic failure to thrive.  It also means those situations of neglect where the parent or caretaker willfully causes or permits the person or health of the child to be placed in a situation such that his or her person or health is endangered.  This includes the intentional failure to provide adequate food, clothing, shelter, or medical care. (California Department of Justice, 1993, p. 9).

Means the negligent failure of a parent or caretaker to provide adequate food, clothing, shelter, medical care, or supervision where no physical injury to the child has occurred.  An example of inadequate supervision is when parents leave their children unsupervised during the hours when the children are out of school.  These parents are often unable to arrange childcare services to meet their needs.  Although these parents may not regard themselves as child abusers, leaving young children without supervision constitutes general neglect.  Children left in these circumstances may also be particularly vulnerable to accidents, injuries, or crime.  (California Department of Justice, 1993, p. 9)

Other forms of Emotional abuse or Damage:

Excessive arguing between parents, domestic violence, criticizing, blaming or giving the child guilt trip for behaving or not behaving in a certain way. Abandoning a child at a young age, abusing the child’s sibling, loving or caring more for the sibling of the child, overly controlling, expecting or demanding a certain behavior can cause emotional damage to a child. Divorce and custody fights are also a cause for emotional harm or distress to the minors.

Behavior indicators of the Child:

Child is withdrawn, depressed and apathetic. Child acts out or is considered a “behavior or problem child”. Unwittingly makes a comment, such as “mommy always tells me I’m bad”. Displays other signs of emotional turmoil (repetitive, rhythmic movements; inordinate attention to details; no verbal or physical communication with others).

is defined as a sexual assault on, or the sexual exploitation of, a minor.  Sexual abuse encompasses a broad spectrum of behavior, and it may consist of many acts over a long period of time (chronic molestation) or a single incident.  . . . Specifically, sexual assault includes: rape, rape in concert, incest, sodomy, oral copulation, penetration of genital or anal opening by a foreign object, and child molestation.  It also includes lewd or lascivious conduct with a child under the age of 14 years, which may apply to any lewd touching if done with the intent of arousing or gratifying the sexual desires of either the person involved or the child.  Sexual exploitation includes conduct or activities related to pornography depicting minors, and promoting prostitution by minors.  (California Department of Justice, 1993, p. 12).

Who are the Child Abusers?

Any body can be a child abuser. Many factors trigger abusive acts towards a child or a minor. Stress, marital problems, work related problems, financial problems, drug or alcohol abuse, being an adult who was a victim of abuse or neglect as a child and other factors can trigger abusive acts upon a child. Many people can not understand how child abuse occurs in a family. Frequently, abusive parents or caretakers themselves have experienced child abuse or neglect, even if they deny or do not believe it.

The first step is to reduce the needless suffering of child abuse or neglect by eliminating the danger to the child. Education is the key to stopping or reducing the abuse. Education can enhance the general well being of the parents and the children. Child abuse investigators and social workers are often sent to the home to assess the risk to the reported child. The investigators and social workers are trained professionals who detect, assess and try to prevent harm and damage and educate the parents about child rearing.